50%
Tweet
Insurers will increase their IT budgets in 2012, with an eye toward replacing legacy systems once and for all, Insurance & Technology research indicates.

Insurers enter 2012 largely prepared to spend more on information technology. But a large proportion of that money will be devoted to replacing legacy core systems, according to recent I&T research.

Fifty-two percent of the executives who participated in I&T's online survey in late October said their companies would increase their 2012 IT budgets by 1 percent or more. Of those, 45 percent plan to increase the IT budget by more than 3 percent. I&T obtained similar results from a live poll of attendees at its Executive Summit in early November: 54 percent of those respondents indicated their IT budgets would rise by 1 percent or more.

The top area of IT investment identified by insurers is policy administration, which garnered 38 percent of the online responses -- a full 17 percent more than the next-highest priority, customer experience/channel management. In the live Summit poll, the difference was even more pronounced: 44 percent of participants named policy administration the top priority, compared with just 17 percent who identified claims as the top priority.

These results dovetail with findings from other industry studies. Respondents to a Novarica study, U.S. Insurer IT Budgets and Projects for 2012, also overwhelmingly ranked policy administration as the top IT priority for 2012, and SMA's 2011 Ecosystem research ranked core systems -- including policy administration, claims and billing -- as the top priority for insurance companies.

"We're really anchored in core system replacement," says SMA founder Deb Smallwood, who spoke at the Executive Summit. "Twelve percent of insurers say they're going to replace their policy systems over the next year or so, and 18 percent are doing major enhancements; that's 30 percent doing something significant."

The number of insurers taking on these projects is indicative of just how strong the imperative is to install modern, flexible systems that provide competitive advantage, argues Novarica's Matt Josefowicz. "I don't think we've ever seen this level of activity," he says. "The need is becoming acute -- if you want speed to market, distributor service, business intelligence and analytics capabilities, you can dance around the core systems in most places for a long time, but it does come down to what's happening there." 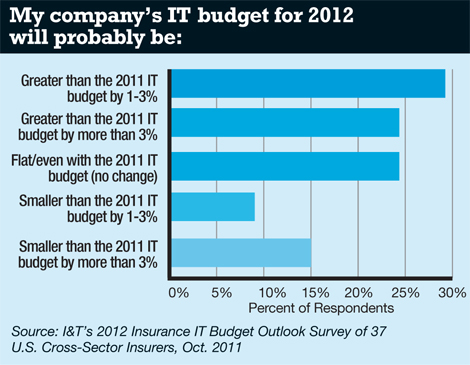 With that in mind, it's not surprising that the No. 1 IT challenge identified by insurers who participated in I&T's online survey was legacy systems (35 percent). Budgets and resources also were identified as a top challenge in the I&T Summit poll.

According to SMA's Smallwood, even as budgets rise on average, the high cost of core systems replacement in particular can strain carriers' resources. "They have all found that their application environments are costly and the cost of integration is enormous," she explains. "And when a small company, especially, does a core system replacement, it can take up all their resources." 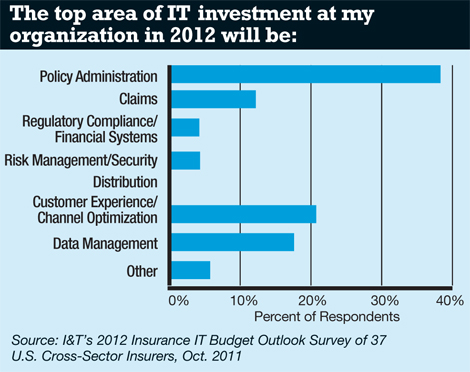